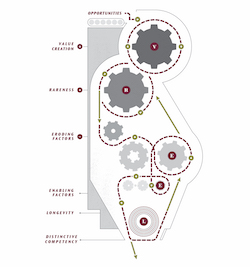 “I’ve been around the block a time or two,

Done almost everything a boy can do,

But there is one thing that I haven’t done,

I wanna know how forever feels…”

That’s the deep, soul ache without which country music would not exist… the desire to find a relationship that lasts forever. Oddly enough, that’s what the people searching for a competitive advantage in the market also want. They want a forever relationship with the right combination of resources, capabilities, and competencies that are creating more value in the market than competitors’ value. And just like in country music, forever in the market is really hard to find. We live in a universe of impermanence. The world is a dynamic place, and things change. What worked today might not work tomorrow, and if it does work tomorrow, it may not work the day after tomorrow.

Another odd parallel with country music and market competition is the way in which words are misused to cover up the lack of finding that true forever love and the inability to have a competitive advantage. Seems like country music people often name what is obviously a toxic brew of interpersonal interactions as “love” in their songs. Perhaps that’s one reason why love so often fails them (at least in their songs). Similarly, market competitors are always bragging about having competitive advantages when they obviously are not outperforming the competition. Perhaps that’s one reason why their advantages often fail them (at least on their P&L statements). Love doesn’t really mean finding love. Competitive advantage doesn’t really mean having an advantage. As Inigo Montoya said in the film The Princess Bride, “You keep using that word. I do not think it means what you think it means.”

Maybe the first step in finding a forever relationship (with another person or a sustainable competitive advantage) is to understand what you are wanting to last forever. I’ll now tiptoe away from the subject of love because… well, I don’t have a desire to prompt the throwing of spears that will come my way if I head in that direction. Besides, I don’t want to spoil the country music genre. But regarding a competitive advantage, let me offer some thoughts about what you want to last forever.

First, to have a competitive advantage, you must be able to show that superior creation of value in the market does exist. It’s not enough to say that you do something better than the competition. It’s not enough simply to do something better than competitors. After all, you might have the nicest car with the best trim on the block, but if you back it into your mailbox and regularly drive over curbs and into yards, that nice car doesn’t make you the best driver on the block. Do you create more value in the market than the competitors? If yes, then you have a competitive advantage. If no, you don’t.

In the V-REEL™ Framework that I created to help people form sound strategy, the first E stands for Eroding factors. The second E stands for Enabling factors. The L stands for Longevity. Ultimately, the goal of the framework is to help the people using it to have a better understanding of whether a competitive advantage is possible and how long it might last. Once you’ve identified resources and capabilities that have Value and some degree of Rareness, you need to consider Eroding and Enabling factors to understand the potential for Longevity. The use of the framework might also suggest the means to increase the longevity of a competitive advantage. Forever is tough, but knowing what you need to do in the market to create distinctive competencies and then following with some good strategic thinking might make the longevity of a competitive advantage last longer than some of the relationships in country music songs.